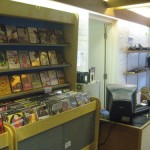 Physical media is currently in a state of unprecedented transformation. Technology that was once only tangible in science fiction has now become merely another way of obtaining the latest episode of Breaking Bad or reading the new Dan Brown novel. The demand for at-home accessibility to every imaginable facet of our media diet is greater than ever. But with so many mainstream options at our fingertips, it can be difficult to reach some alternative fare. Sifting through thousands of titles on Netflix for the duration of a feature film can be a daunting and mind-numbing experience. Sometimes you just need to stretch your legs and head to the video store.

Unfortunately, such establishments are a dying breed and seem to be especially rare in these parts. What was once an essential cornerstone business of every urban area has been relegated to half an isle at convenience stores. As we push further into the total digital age, this is an acceptable option when seeking out Hollywood’s latest special effects maelstrom. But for those who wish to use film as an educational tool or to create a cultural dialogue, the loss of these establishments is more than merely mourning nostalgia.

When Have You Seen – the last independent video rental store in Peterborough – announced it was closing its doors in the autumn of 2011, members of Sadleir House galvanized an eleventh hour effort to preserve as much of the beloved business’s catalogue as possible. Thanks to a public donation campaign, the student-owned community space raised nearly $10,000 in just a few days. With the funds, Sadleir House were able to acquire hundreds of Have You Seen’s best and rarest films which now have a permanent home as a major new addition to the institution’s public lending library.

The building’s library now resembles a condensed version of the iconic video store, having also procured several of Have You Seens neon-hued shelves which, once again, can offer a taste of the best in international and documentary cinema. The collection currently operates with approximately a quarter of the purchased films in circulation while the rest are catalogued and prepared for rental. But the response has already been terrific.

“People have been ecstatic to see the collection up and running again.” said Dwayne Collins, Steward of Sadleir House.

“There is still the demand for the physical product. Netflix is convenient but doesn’t offer many harder to find titles and likely never will.” Collins added that the collection will also act as a supplement to the Peterborough’s Public Library which has a wide range of titles, but demand there is more for newer releases. “Popularity is not the main driver with these and future films that Sadleir House will offer. Even if a specific title is only borrowed once a year, it’s worth having as it would be invaluable to that individual that needed it.” This will come as a relief to students and faculty alike who rely on more obscure audio-visual aids for presentations and lessons. The library is always looking for volunteers. “Even if it is just an extra body to help keep the doors open, or if someone can help us to continue to catalogue and organize the films.” said Collins.

For hours, fees, and more information on how you can volunteer for Sadleir House’s exciting projects, or if you wish to view the library’s ever-expanding catalogue of over 1200 titles, please visit: www.sadleirhouse.ca/library.shtml