Party for Peck is an annual music festival held each August long weekend in the Campbellford area, in honour of local musician Jesse “Peck” Archer who was tragically killed in 2010 at the age of 26. The event raises funds for the Blues in The Schools (BITS) program in Northumberland County, providing education to local elementary schools to help preserve and promote blues music — a particular love of Jesse’s.


First introduced in Chicago public schools in 1978, BITS is still going strong more than three decades later and has since spread around the world. Professional blues musicians are invited into schools to conduct classes on the history of the blues, famous blues musicians, different styles of blues, and how to write, sing and perform the blues.

Coordinated in the Peterborough and Belleville area by Loyal Blues Fellowship (www.loyalblues.ca), this music-based education program is tailored to the needs of particular schools and is adapted by teachers to provide lessons in history, geography, poetry, and language, as well as social studies focused on racial prejudice and discrimination.

Party for Peck (“P4P”) was created by the Archer family and friends — spearheaded by Jesse’s brother Matthew — in an effort to do something positive in the wake of the family’s tragic loss and to bring to fruition Matthew and Jesse’s dream of producing a music festival in the Trent Hills area that promotes local musicians. When they made it a fundraiser, BITS was a natural choice since the family had first encountered the program 10 years before at their annual pilgrimage to Ottawa Bluesfest (www.ottawabluesfest.ca, also a Blues in The Schools event).

The fundraiser also promotes awareness of the importance of organ donation (www.beadonor.ca).

Jesse was an organ donor and the simple fact that he registered his wishes allowed him to help five people and their families. As Jesse’s family, this really meant a lot to us; it gave us something positive to hang on to during the most difficult times we had ever faced. At the inaugural Party for Peck in 2011, where green donor ribbons were provided to attendees, the feedback was very moving as one woman — who was herself an organ recipient a few years ago — expressed her appreciation and joy at the sea of green ribbons and at being able to speak openly of her experience.

Party for Peck has evolved and is no longer just about local music: it’s about someone who made local music his life. Jesse loved to entertain his friends and family even from a young age and was unstoppable until the day he died. He played guitar and sang in several bands, often playing four to six hours a night. And just because he is gone doesn’t mean he has stopped entertaining us either. Join us at Party for Peck and find out exactly what we mean!

[soundcloud height=”370″]http://soundcloud.com/apgulston/party[/soundcloud]
This year’s Party for Peck will be held on private property at 588 Thomson Road near Campbellford on August 2nd for an admission cost of $10 at the gate. Rough camping, parking, a community campfire, and great local foods will be available on site, as well as door prizes and raffle items. Please bring lawn chairs and don’t forget sunscreen, bug spray, and extra water (it’s also BYOB). The festival stage, built by volunteers from donated material, will feature great sound and lights provided by Loyal Blues Fellowship.

We are very fortunate to have some of the finest musicians in Peterborough and Trent Hills volunteering their time to play at this year’s Party for Peck. They include many of the area’s favourites: the hard-rockin’ Lindsay Barr Band, singer/songwriter Grainne Ryan, blues band Balls and Jane (featuring me, Wire Award Female Vocalist of the Year), singer/songwriter Mike Wallace (best known as the Muddy Hack), breath-of-fresh-air-on-the-Peterborough-rock-scene New Speak, the Peggy Voight Band led by Loyal Blues Fellowship President Peggy Voight, and newcomer My Last Nerve. There will also be a jam hour featuring harp wiz Sugarlips, local guitarist Dave Papple, blues guitarist/singer Arin Jessup, and more.

Over the last four years, Party for Peck has proven to be a very special event — where you can meet your friends and make plenty of new ones, where you can truly relax and be yourself in a warm and supportive atmosphere, and where you can take a timeout from your cares and woes and rest in the knowledge that you’re helping bring blues music education and a whole new perspective to the next generation.

It feels good to do good. See you there!

For more information, email me at wearchers@hotmail.com or visit Party for Peck on Facebook.

“My Old Friend” by Jesse Archer 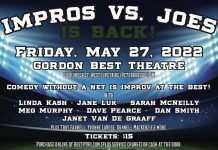 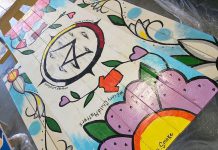 kawarthaNOW - May 20, 2022
Port Hope woman had mysteriously disappeared after leaving her family's home on April 22.
Send this to a friend