July is a fine time for music in Peterborough and the Kawarthas. I’ve been busy touring and I’m finally am off stage, out of the van, and not asleep. I’m a week late, but I now present to you the “better-late-than-never edition” of my monthly live music column. I’m only scratching the surface of the music happening in the area but I like to feature an eclectic range of events, so here we go.

Lakefield Jazz, Art & Craft Festival on the River on July 9

On Saturday, July 9th you will definitely want to hit the Lakefield Jazz, Art & Craft Festival on the River — a long title because it’s full of great stuff.

An eclectic mix of jazz will be featured among all of the art, from gypsy jazz, to big band, to something rooted more in folk/rock.

Tickets are only $5. The festival happens at Isabel Morris Park (20 Concession St., Lakefield)

Conway’s music drifts between a few genres and always make for a great night out. Rock/new wave/country combine for something brand new. The show begins at 10 p.m. and is $3 at the door.

On Tuesday, July 12th you can catch the always imitable Al Black and the Steady Trio. Blues, roots, and beyond.

It’s in the running for most beautiful stage in the area, as it sits on the boardwalk just steps from Rice Lake.

Hey Rosetta! from St. John’s, Newfoundland will bring their infectious and layered form of rock. It’s not necessarily your dad’s rock music, but I bet he’ll like it.

As always at Musicfest, admission is free.

It will be a rock and roll reunion on Saturday, July 16th at The Historic Red Dog Tavern (189 Hunter St. W, Peterborough, 705-750-1710) with Peterborough-area legends Max Mouse and the Gorillas returning to the stage.

Opening the show is another icon of Peteborough music, Joe Hall and Friends.

“Steppin’ Out” – Max Mouse and the Gorillas

Basia Bulat at the Gordon Best in Peterborough on July 20

The Canadian songstress has received much acclaim for her latest record, Good Advice. She writes and performs great tunes that have some pop to them but also sharp depth.

Peterborough’s own Evangeline Gentle opens up the show.

Presented by the Peterborough Folk Festival, tickets are $25 (plus service charge). Doors open at 7 p.m. with music starting at 8 p.m.

Rob Phillips and Marsala Lukianchuk at Peterborough Square on July 22

Peterborough’s DBIA presents its “Live and Local Lunch” series in the courtyard of Peterborough Square in downtown Peterborough every Friday in the summer from noon to 1 p.m.

On Friday, July 22nd, Rob Phillips, one of Peterborough’s great piano players, teams up with the singing talent of Marsala Lukianchuk to bring jazz standards and more to your lunch hour.

DREA at The Garnet in Peterborough on July 28

Now based in the Yukon, DREA returns with her full voice and songs that go from clever to heartbreaking, with melodies that sound hand-made and genuine.

The show begins at 9 p.m. and tickets will be available at the door.

“Hearts Parts” – Drea and The Naysayers

Enjoy a concert in Lindsay’s Victoria Park (210 Kent St. W., Lindsay) as part of the Concerts in the Park series.

There will be toe-tapping, knee slapping music on Sunday, July 31st at 2 p.m. when Gord Magee and The Blue Sky Fliers will perform.

Magee has toured the world with tenor John McDermott and many others, and his band is made up of virtuosic guitar, percussion, and sax players.

The show is absolutely free and perfect for a Sunday family outing. 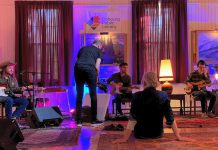 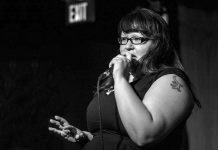 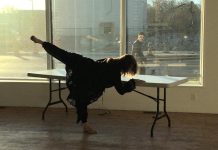