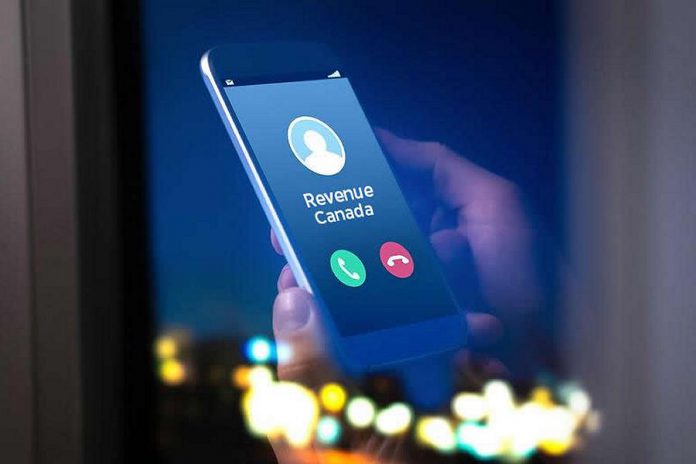 If Peterborough is any indication, the people behind the Canada Revenue Agency scam continue to rake in millions of dollars from unsuspecting Canadians — and it’s not just elderly people who are falling victim to the scam.

“These scammers are extremely aggressive and relentless,” says Detective Constable Keith Calderwood of the Peterborough Police Service Fraud Unit. “They are targeting everyone and anyone regardless of gender or age.”

On October 29th, the24-year-old woman received a voice message on her cell phone stating she owed the CRA approximately $8,000 from two years ago and there is currently an ongoing investigation into her debt. The message further stated that if she didn’t repay the outstanding debt, she would be arrested.

The victim called the number provided and spoke with a man pretending to be a police officer. The fake officer told the woman she could repay the money using the online platform BitCoin and instructed her to use a BitCoin machine located on George Street in Peterborough.

The victim then attended a local MoneyMart where she withdrew a $4,000 loan. The victim then went to the BitCoin machine on George Street and purchased $8,000 in BitCoins and sent a QR code to the fake officer to complete the transaction. The victim later spoke with a family member who advised she had been defrauded and urged her to contact police.

Also on October 29th, a 27-year-old Peterborough woman received a phone call from a person who said that if she did not send them $5,000, a warrant would be issued for her arrest. Scared by the threat, the victim sent the unknown person $5,000 through BitCoin, using a supplied barcode to transfer the money. The victim later called police to report the incident after realizing she had been scammed.

In late October, a 57-year-old Peterborough man received a phone call from an unknown male claiming to be a police officer investigating on behalf of the CRA. As a result of the phone call, the victim purchased $2,000 in Google Play gift cards and sent the fake officer the serial numbers on the cards in order to pay the fake debt.

According to information from the Better Business Bureau, the CRA tax scam has bilked Canadians out of more than $10 million since 2015, with the amount of the fraud increasing by $1 million each year. A recent CBC Marketplace investigation traced some of the tax scam calls to Mumbai in India.

The tax scam is commonly conducted over the telephone, although you may also receive a scam email. In the telephone version, the scammers use a computer-generated voice to make their demands.

In general, if you receive a telephone call or email purporting to be from the Canada Revenue Agency, do not respond; instead, contact the CRA at 1-800-959-8281 or check your online CRA account for notifications.

“If you get a call from someone you don’t know stating you owe money and threatening your arrest, stop, pause, and think,” explains Detective Calderwood. “Hang up, call a trusted friend or family member and call your bank. The CRA will not ask for payment in the form of BitCoins, gift cards, or prepaid credit cards. They will not threaten arrest or send a police officer to your home.”

If you have been the victim of a scam — meaning you have handed over money to a scammer — report the incident to the Peterborough Police Service at 705-876-1122 or via the online reporting system at www.peterboroughpolice.com/report/a-crime/.

If you would like to report receiving a scam phone call or message,e call the Canadian Anti-Fraud Centre at 1-888-495-8501 or make an online report via the centre’s website.