Peterborough police are seeking two men who wielded knives while robbing two children of their bikes on Sunday afternoon (July 26).

Shortly before noon, the two children, aged 10 and 12, were riding their bikes along a walking path connecting Lansdowne Street to the corner of Pinewood Drive and Cahill Drive in Peterborough.

As the children neared the end of the path, two unknown men yelled at the children to get off their bikes. It was reported that the two men were each holding a knife during the incident.

Both children got off their bikes and ran south on Pinewood Drive. The two men fled the area with the stolen bikes. The incident was reported to police and officers were dispatched to the area to investigate.

The suspects are described as follows:

The stolen property is described as follows:

Anyone with information is asked to call the Peterborough Police at 705-876-1122 or contact Crime Stoppers at 1-800-222-TIPS or www.stopcrimehere.ca. 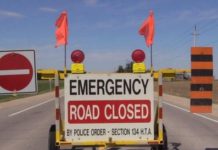