There’s something for everyone in Netflix’s December offerings, including the black comedy Don’t Look Up. A satire of the climate crisis, the film stars Leonardo DiCaprio and Jennifer Lawrence as two low-level astronomers attempting, via a media tour, to warn humankind that a planet-killing comet is hurtling toward Earth. The problem? Nobody seems to care. The film is set for a limited theatrical release on December 10 before coming to Netflix on Christmas Eve.

The Power of the Dog, the latest film by Oscar-winning director Jane Campion, stars Benedict Cumberbatch as charismatic rancher Phil Burbank, who inspires fear and awe in those around him. When his brother George (Jesse Plemons) brings home a new wife (Kirsten Dunst) and her son (Kodi Smit-McPhee), Phil torments them until he finds himself exposed to the possibility of love. The critically acclaimed film had a limited theatrical release in the U.S. on November 17 and will have its worldwide debut on Netflix on Wednesday, December 1st.

There’s also The Unforgivable, based on the 2009 British miniseries Unforgiven written by Sally Wainwright. The Netflix film stars Sandra Bullock as a woman released from prison after serving a sentence for a violent crime. Unforgiven by society, she seeks redemption by finding the estranged younger sister she was forced to leave behind. In what’s becoming a trend, the film is also set for a limited release in theatres on November 24 before premiering on Netflix on Friday, December 10th.

Some popular Netflix series are returning in December, including season 2 of The Witcher, premiering on Friday, December 17th. The eight-episode season sees mutated monster-hunter for hire Geralt of Rivia (Henry Cavill) continue the journey toward his destiny in a turbulent world were people are often more wicked than beasts.

Of course, there’s also a selection of holiday-themed movies and series streaming in December, including Single All the Way (Dec. 2), David and the Elves (Dec. 6), Carolin Kebekus: The Last Christmas Special (Dec. 8), How To Ruin Christmas: Season 2 (Dec. 10), StarBeam: Beaming in the New Year (Dec. 14), A California Christmas: City Lights and A Naija Christmas (Dec. 16), Grumpy Christmas (Dec. 22), and 1000 Miles from Christmas (Dec. 24).

New and returning Netflix series include Coming Out Colton and Money Heist: Part 5 Vol 2 (both on Dec. 3), season 3 of Titans (Dec. 8), Twentysomethings: Austin and Saturday Morning All Star Hits! (both on Dec. 10), Selling Tampa (Dec. 15), and Anxious People (Dec. 29).

VIDEO: “The Power of the Dog” trailer

Other returning series include season 8 of The Flash (new weekly episodes starting Dec. 2), season 5 of Workin’ Moms (Dec. 3), and season 6 of Superstore (Dec. 15).

Theatrically released films premiering on Netflix in December include The Big Lebowski, Bridesmaids, Reservoir Dogs, Schindler’s List, Les Misérables: The Staged Concert, Love Actually, Meet Joe Black, Notting Hill, Spartacus, and Spider-Man 3 (all on Dec. 1), Jumanji: The Next Level (Dec. 2), The Fast and the Furious franchise (Dec. 3), The Grudge (Dec. 9), Just Mercy (Dec. 12), Sleepless in Seattle and Taxi Driver (both on Dec. 15), The Boss Baby and Gemini Man (both on Dec. 18), and Little Women (2019 version, Dec. 22).

Here’s the complete list of everything coming to Netflix Canada in December, along with what’s leaving. 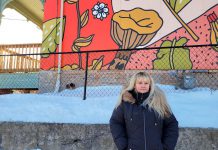