As a cinema goer, I always eagerly anticipate the arrival of a new Leonardo DiCaprio movie.

Leo, as blandly obnoxious as he can be, generally heralds the arrival of a major film event. His intense star wattage notwithstanding, it seems unlikely that Martin Scorsese consistently collaborates with him to ensure a healthy box office. No, DiCaprio has managed that exceedingly rare balance of bankability and credibility.

Many have marvelled at the striking differences between DiCaprio’s latest multiplex offerings: Baz Luhrmann’s long-delayed The Great Gatsby and Quentin Tarantino’s Django Unchained.

But the similarities are there. Where Tarantino utilizes sparkling yet derivative wordplay, Luhrmann wields overwhelming visuals to do the heavy lifting.

Essentially, the breathless style is the substance.

So naturally an adaptation of a timeless novel examining the nature of identity, artifice, and star-crossed love should be the perfect fit.

And, in ways, it is. The potent talismans of Fitzgerald’s text effortlessly lend themselves to film. Though, comparing films to their source novels is a redundant exercise; adaptations exist as separate entities forged in a different medium — and should be treated as such.

The deliberately anachronistic period film is a genre that has not-so-subtlely crept to the forefront of contemporary cinema’s most sure-fire successes. Here it is presented as an uber-stylish strop-fest that brilliantly and expensively depicts a specific time and place with dubious accuracy; the clothes and expressions may be inspired, but the soundtrack is decidedly Top 40.


That way, you can trick teenagers into thinking they’re seeing Gangster Squad Part 2 with the allure of Leonardo’s reassuring good looks and another phoned-in new track from executive producer Shawn “Jay-Z” Carter. When, in reality, they’re in for 148 minutes of preposterously uninvolving narration from the charisma-free black hole that is Tobey Maguire, as natural-born wet blanket Nick Carraway.

Cue much upper-crust ennui and self loathing as Carraway is pulled into the seductive nouveau riche existence of his enigmatic neighbour, Jay Gatsby (DiCaprio, fine). Gatsby longs for Carraway’s cousin, the allegedly heartbreaking Daisy (Carey Mulligan, miscast) who is tragically married to the boorish polo superstar, Tom Buchanan (Joel Edgerton, excellent), who is carrying on an affair with the brassy Myrtle Wilson (Isla Fisher, underused).

And that’s about it for plot.


The film is a visual marvel. Catherine Martin’s costume and production design are as on point as ever and the 3D gives her even more room to flex her muscles. Martin fuses her own creations with selected pieces from Prada and Miu Miu and deserves a raft of statues come award season.

The film has been accredited with inspiring many runway collections around the world and, trust me, this is a good thing — despite a campaign depicting a stable of Hollywood’s best and brightest grimacing behind a guilded deco emblem that will surely be stamped upon a sea of tie in merchandise.

Luhrmann has cobbled together an impressive playlist of cutting-edge 21st-century assembly line pop. Though the results don’t quite scrape the heights of the 90s’ alt-euphoria or the patchwork throb of his earlier Romeo and Juliet or Moulin Rouge respectively.

Granted the latter was his only true musical, but all of Luhrmann’s dazzling visions receive the frenetic editing of a music video. Florence Welch channels her self-important banshee wail into a mid-tempo anthem of soaring beauty; a brief flourish of Gershwin delivers a refreshing suggestion of period accuracy and for once the film feels authentic.

The celluloid equivalent of reading a classic novel on an iPad, many will love it, more will hate it, but all should see it — even if only to ponder the future position and merit of art in mainstream cinema. 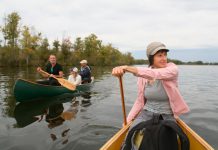