Film buffs are counting down the days until the annual ReFrame Film Festival kicks off on Friday, January 23rd. Now in its 11th year, the festival has become a must-attend event, attracting crowds from across our region and beyond to downtown Peterborough.

ReFrame screens films that focus on issues of social justice, diversity, human rights, and environmental responsibility. The goal of festival organizers is to touch as many people in the community as possible by making programming affordable for all, introducing children and youth to film and to world issues, and by collaborating on projects with other community groups and artists.

In addition to the screening of dozens of films at several downtown venues, there are also many special events taking place during the festival.

A filmmaker’s panel will be happening on Saturday, January 23 at the Bourbon Barrel Saloon, located at 140 King Street, starting at 11:30 a.m. Four filmmakers including Clarke Mackey, Joan Sullivan, and Sean Liliani will be discussing the important connections between filmmaking and activism.

Following the filmmaker’s panel on Saturday, a food panel is being held on Sunday, January 25, also at the Bourbon Barrel Saloon. The panel discussion will get underway at 11 a.m. The panelists Jill Bishop, Ryan DeCaire, Carolyn Doris, and Wayne Roberts, with moderator Joëlle Favreau, will explore issues around the ever-growing food movement and the role that artists and the arts play in shaping it.

For a full listing of other events associated with the festival, visit their website at reframefilmfestival.ca (or see kawarthaNOW’s listings).

Getting back to films, there are many great films being screened that have an environmental focus. Covering a broad range of topics from climate change and food waste to cycling and green burials, there’s something for every interest.

Here’s a quick glance at a few of the eco-themed films you can check out.

Marinoni: The Fire in the Frame

Italian-born, Montreal-based Giuseppe Marinoni is a revered craftsman whose bicycle frames are highly admired and desired. At age 75, Marinoni is attempting to set a world record for his age group for distance cycled in one hour. Somewhat begrudgingly, he allows his training to be recorded on camera over a period of 60 days — with plenty of humorous give and take between reluctant subject and dogged director.

Living on the Edge

In 2010, Eastern Quebec saw an extreme weather event which became a wakeup call for people living along the coast of the St. Lawrence River. In the aftermath of the event an enterprising woman, Joan Sullivan, sets out with her camera to document how people living along the river are experiencing and adapting to climate change. The film’s poetic and spectacular images portray the geography of Joan’s personal journey revealing the fears, frustrations, and hopes of this former international aid worker turned organic farmer turned photographer turned environmental activist.

If we really love food, and if the world so badly needs a good supply of it, why do we throw over 40% of it away? Why are we so obsessed with expiry dates, perfect produce, and portion sizes? To find answers, Jen Rustemeyer and Grant Baldwin vow to stop buying groceries and to survive for six months exclusively on discarded food. The myths behind corporate food production and marketing make for easy pickings as they dismantle best-before dates and show how our idea of “perfect produce” encourages us to discard perfectly edible and wholesome food — collateral damage in an age of food security headlines.

A Will for the Woods

Musician, folk dancer, and psychiatrist Clark Wang battles lymphoma while facing a potentially imminent need for funeral plans. Determined that his last act will not harm the environment and may even help protect it, Clark has discovered the movement to encourage sustainable funerals that conserve natural areas. Enabling Clark’s wish is green burial pioneer Joe Sehee, who aims to realize this concept’s vast potential by helping define its goals and standards and endeavoring to open the world’s largest conservation burial ground.

Passes for ReFrame are available for purchase at the GreenUP Store — as well as other five other locations in Peterborough and Lakefield and online at the ReFrame website. The cost is $35 for adults, $20 for students and those who are un/underemployed. Rush tickets are available at the door of individual screenings and are $10 each or pay what you can.

The full schedule of films and events (and locations for passes) can be seen at reframefilmfestival.ca (or see kawarthaNOW’s listings). 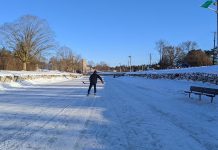 kawarthaNOW - February 8, 2023
Annual challenge encourages residents to help improve the habitat for native pollinators by planting a garden.
Send this to a friend