What better way to celebrate Canada’s 150th than enjoying a quintessentially Canadian dessert?

This year, the Kawarthas Northumberland Butter Tart Tour is getting a patriotic makeover with the new “Canadiana Collection” of butter tarts. Each bakery has been encouraged to develop a new flavour that showcases their Canadian pride.

Earlier today (May 16), the new flavours were launched to the world at an event at the Silver Bean Cafe, where the tarts were paddled in by canoe and ceremoniously handed to Stu Harrison, General Manager of the Peterborough Chamber of Commerce. The flavours are available now on the Kawarthas Northumberland Butter Tart Tour.

“The butter tart tour has a life of it’s own, but we wanted to bring something new into it to get people energized about it, and we thought, what better way than to tie it in with Canada’s 150th.”

“We tried to really focus on ensuring that we’re using lots of local products in the tarts. They’re not just Canadian, they’re also a celebration of what the Kawarthas has to offer.”

Both are made with butter from Kawartha Dairy.

“Those were the things that were really near and dear to my heart that were Canadian. Bacon, whiskey, and coffee.”

“I love trying to pair different foods together. It just makes me excited, I love creating things.”

Two of her tarts were homages to famous Canadians: the Trudeau and the Rick Mercer. She is hoping that she will get the chance to serve the tarts to the men who inspired them.

Here are some of the many Canadiana-themed butter tarts available to try on the Butter Tart Tour:

This butter tart is made with caramelized apples and cinnamon cream cheese, then topped with caramel drizzle and a white chocolate maple leaf. Deanna Bell-Hall named the tart as an homage to local history and to the play put on by the 4th Line Theatre. “It’s sort of rebellious like the Cavan Blazers were.”

This decadent tart is made with Maple Ice Wine from Kawartha Country Wines. Wine and butter tarts, need I say more?

This butter tart is beautifully presented, with tart sliced apples and a crust that contains Empire cheese curds, which Geoff Kirkland of Firefly Bakery points out are a Canadian staple. “You can’t go to a gas station in Ontario without buying some cheese curds.”

This tart is made with maple syrup infused with Ste. Anne’s Feathery Pear Tea, a blend of green and white tea with apple chunks, pears and daisy petals. *Gluten Free

This tart contains candied rhubarb and strawberries for a tart and sweet filling. The crust is infused with rose petal extract from the spa’s own gardens. *Gluten Free

This tart, made as an homage to the Canadian music legend, is made with maple whiskey.

This sweet and salty tart is made with the most Canadian of meats and a good quantity of maple syrup.

For those who can’t pass a Tim Horton’s without hitting the drive through, this tart has a beautiful coffee flavour.

Make a fashion statement with your butter tart with the Lumberjack. This tart is made with Grandma O’Reilly’s traditional recipe, but the top is patterned with plaid.

With a graham cracker crust, butter tart filling, dark chocolate ganache and a toasted marshmallow on each tart, The Dutch Oven has created a tart that tastes like the most decadent campfire fare.

This tart is the love child of a butter tart and a nanaimo bar, topped with custard icing and a drizzle of chocolate.

These traditional tarts are made according to Mrs. Waldron’s recipe. It honours the role of Canadian moms like Mrs. Waldron in our history.

What butter tart would Justin Trudeau eat? Janet Healey of Baked4U is betting he’d choose something as healthy as possible. This butter tart combines nuts, apples, raisins and coconut with butter tart filling.

This tart is made with butter tart filling and a decadent layer of cheesecake made with locally produced Crosswind Farm goat cheese.

This tart combines apple pie filling with butter tart filling for a tart that might be the ultimate comfort food.

This tart is traditional and elegant, made with honey and maple syrup from South Pond Farms.

Baker Cathy Smith reimagined a haystack cookie as a beaver dam. “We sit right on the beautiful Indian River, so we see lots of these out there.” She put it on top of one of her decadent original butter tarts for a Canadiana treat.

Coffee Crisp bars are only available in Canada, and this tart features crumbly coffee crisp over a classic Kawartha Buttertart Factory tart.

A plain butter tart with red and white Canada flag notions and a drizzle of dark chocolate. Because eating butter tarts is a great way to showcase your national pride. 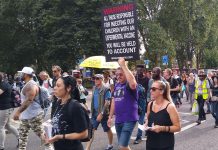