In celebration of International Women’s Day, one of Canada’s leading female tech entrepreneurs will be giving a virtual keynote for residents of Peterborough and the Kawarthas on Tuesday, March 9th at 7 p.m.

The Innovation Cluster is hosting Saadia Muzaffar as part of its ‘Electric City Talks’ series.

Muzaffar is a tech entrepreneur, author, and passionate advocate of responsible innovation, decent work for everyone, and prosperity of immigrant talent in science, technology, engineering, and mathematics (STEM). She is the founder of TechGirls Canada, a hub for Canadian women in STEM, and co-founder of Tech Reset Canada, a group of business people, technologists, and other residents advocating for innovation that is focused on the public good.

In 2017, Muzaffar was featured in Canada 150 Women, a book about 150 of the most influential and groundbreaking women in Canada. Her work has been featured in CNNMoney, BBC World, Fortune Magazine, The Globe and Mail, VICE, CBC, TVO, and Chatelaine.

Muzaffar’s March 9th talk, entitled ‘Redefining Term Sheets: Success, Solidarity, & The Future We Want’, will inspire women to achieve success in all areas of life, including in business by providing strategies for obtaining funding.

“It is impossible to explain how women only get 2.2 per cent of funding for their ventures while we constitute a majority of the population, without acknowledging long-standing structural and systemic bias,” Muzaffar says, describing her talk. “Women know these odds in our bones because we feel them in too many boardrooms, banks, media advertisements, and venture competitions — yet women are the fastest-growing demographic in new businesses.”

“So this International Women’s Day, let’s skip the statistics and talk about how we can pave the way to build our own success stories on our own terms, and also make sure that we hold the door open for future people like us. In the throes of a global pandemic that is setting back women most severely, this conversation about our collective ambition and its responsibility and inspiration is as urgent as it is necessary.”

Presented in partnership with RBC, Muzaffar’s talk will be hosted via Zoom and will be free of charge to reduce barriers to entry. To reserve your space, register at eventbrite.com/e/137992949627.

As well as her work with TechGirls Canada Tech Reset Canada, Muzaffar is a Pushcart Prize nominated short fiction writer and, in February 2018, her work joined that of Margaret Atwood, Gabby Rivera, Hope Larson, and Amy Chu in Dark Horse Comics’ anthology featuring comic and prose stories. In 2017, Muzaffarand her team released Change Together: A Diversity Guidebook for Startups and Scaleup. She serves on the board of Women’s Shelters Canada and the advisory board for the University of Guelph’s Centre for Advancing Responsible and Ethical Artificial Intelligence.

In April 2018, Muzaffar joined an advisory panel of 15 leading experts in Canada on digital technology, privacy, and governance, which was guiding Waterfront Toronto on the former “smart city” proposal from Sidewalk Labs, the urban innovation company of Alphabet Inc., Google’s parent company.

She resigned from the panel seven months later, publicly citing several concerns including a “blatant disregard for resident concerns about data and digital infrastructure”. Her resignation was followed shortly thereafter, for similar reasons, by that of former Ontario privacy commissioner Ann Cavoukian.

In May 2020, Sidewalk Labs abandoned the controversial $900-million Toronto project, claiming economic uncertainties. However, in February 2021, Sidewalk Labs also abandoned another smart city project in Portland, Oregon after disagreements with public officials about transparency and disputes about data sharing — the same concerns that led Muzaffar to resign from the Toronto advisory panel.

The Innovation Cluster is hosting Muzaffar’s talk as the first cohort of its ‘Women Breaking Barriers’ program wraps up. Ten female-led companies were selected to participate in the fast-tracked accelerator for STEM and social innovation. By the end of February, each participant will have pitched to the local angel investors that make up the Peterborough Region Angel Network.

“Inspired by the Women Breaking Barriers program and the incredible female founders in our region, this event will host important conversations to continue to move the dial forward,” says Rosalea Terry, Women Breaking Barriers lead and senior innovation specialist and marketing manager with the Innovation Cluster. “Saadia is sure to impress and give actionable steps to create change.”

This presentation will provide a space for students, entrepreneurs, business leaders and community members alike to engage in critical discussion that inspires and ignites change. Following the keynote, audience members will be able to take part in a question-and-answer session. 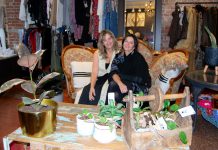 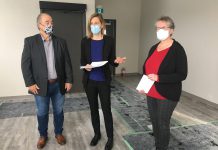 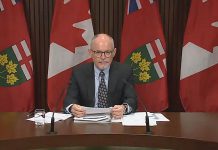 Artist JoEllen Brydon carries on her family tradition of storytelling during...