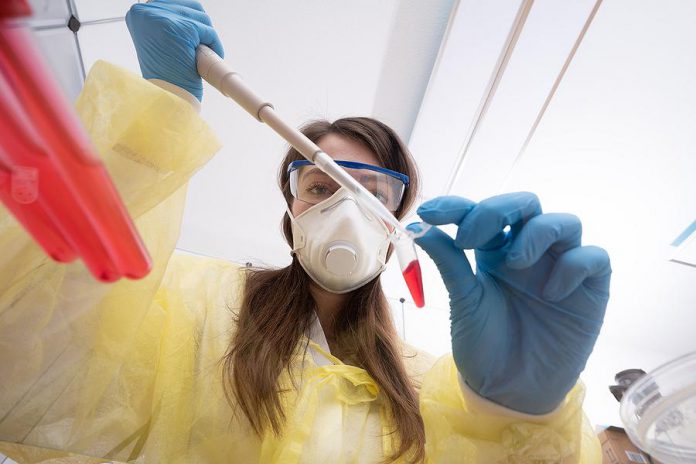 In the greater Kawarthas region, there are 47 new cases to report and an additional 8 cases resolved, with the number of active cases across the region increasing by 36 from yesterday to 154. Most of the new cases — 32 — are in Hastings Prince Edward (currently in the ‘Green-Prevent’ level), which overtook Peterborough today (currently in the ‘Red-Control’ level) with the highest number of active cases in the region at 71 due to outbreaks in Quinte West and Belleville. See below for detailed numbers from each regional health unit.

Ontario is reporting 15 new COVID-19 deaths today, with 4 new deaths in long-term care homes for the second day in a row. Ontario has averaged 15 new daily deaths over the past week, an increase of 1 from yesterday.

In the greater Kawarthas region, there are 47 new cases to report, including 32 in Hastings Prince Edward, 9 in Peterborough, 4 in Kawartha Lakes, and 2 in Northumberland. There are no new cases in Haliburton.

Two outbreaks at two unidentified workplaces in the City of Peterborough were declared on March 31.

There is 1 new hospitalization in Hastings Prince Edward.

There are 13 new regional cases of presumed variants of concern, including 6 in Peterborough, 5 in Hastings Prince Edward, and 2 in Kawartha Lakes.

An additional 8 cases have been resolved, including 7 in Peterborough and 1 in Kawartha Lakes. An outbreak at an unidentified congregate living facility in Peterborough was declared resolved on March 29.

There are currently 154 active cases in the greater Kawarthas region, an increase of 36 from yesterday, including 71 in Hastings Prince Edward (11 in Quinte West, 32 in Belleville, 6 in Tyendinaga & Deseronto, 5 in Prince Edward County, 7 in Central Hastings, and 2 in North Hastings), 52 in Peterborough, 18 in Northumberland, and 13 in Kawartha Lakes. There are no active cases in Haliburton.

*As of March 31, Peterborough Regional Health Centre is reporting fewer than 10 patients hospitalized with COVID-19 (no change) and 24 patients transferred from other areas as a result of a provincial directive (increase of 1).

***This total includes an additional 7 high-risk contacts directly followed up through the Public Health Ontario contact tracing process that are missing the contacts’ county.

****As of March 31, Ross Memorial Hospital in Lindsay reports 1 patients hospitalized with COVID-19 (decrease of 1).