While Peterborough Musicfest has consistently shone its spotlight on Canadian country music talent over the years, doing so this summer is particularly prudent in light of an event — or rather a non-event — that has left fans of the genre starving for their fix.

With the cancellation of the 2022 Havelock Country Jamboree, there’s a void to be filled and, by welcoming two of Canada’s rising country music stars to its stage, Peterborough Musicfest is doing its part to satisfy the insatiable appetite of the deprived.

In enticing the duo to its stage, Peterborough Musicfest has secured two artists before they likely become unattainable. Think Carly Rae Jepsen back in July 2012, whose stock rose quickly and significantly after her Musicfest appearance upon the coinciding release of her groundbreaking hit “Call Me Maybe.”

Warkworth-raised Sacha (Visagie) and Toronto native Barney are each on similarly dramatic trajectories — an accelerating momentum that has been fueled by hit singles mingled with social media buzz.

Sacha has experienced a meteoric rise in the country music realm, beginning in 2020 with the release of her debut EP The Best Thing and the single “Standards,” which has been streamed 10 million times to date and counting.

“The second I heard it (Standards), it just hit me like a ton of bricks,” she told Erica Zisman in an April 2021 interview for Country Swag.

“I always loved making music for the love of it, but the main thing is having a good message to go along with. We have a lot of heartbreak songs on country radio, but not a lot of songs that might help you avoid one.”

But it was Sacha’s follow-up collaboration with The Reklaws on the 2021 TitTok hit “What The Truck” that gave Sacha her first gold-certified song and really got the ball rolling. Included on her latest EP We Did, the song is the fastest-ever Canadian country song to go gold in the streaming era, reaching that status in just 16 weeks.

This is all pretty heady stuff for a girl who had a music dream at a young age.

“The impact of country living and country music just had an effect on me,” she told Zisman.

“I didn’t even realize what kind of music I was falling in love with. It was just what I heard over the speakers really struck a chord with me. I remember singing along and wishing I was the voice on the other side of the speaker.”

VIDEO: “What The Truck” – The Reklaws featuring Sacha

Sacha has garnered music industry praise in quick fashion. A Country Music Association of Ontario Rising Star nominee in 2021, Sacha was named an iHeartRadio Future Star, and three of her videos — for the songs “Cheers,” “Standards,” and “What The Truck” — have received regular play on Country Music Television.

And as a testament to her talent and quickly growing popularity, she was asked to join Maddie & Tae on their Next Women Of Country All Song No Static Tour that stopped in 16 U.S. cities earlier this year.

Beyond her music, not lost on Sacha is what she represents as a woman of colour in a music genre where that’s not too common.

“I’m optimistic about the shift that is occurring regarding Canadian values being represented in the country music industry,” she told Front Porch Music in an August 2020 interview.

“As Canadians, we pride ourselves on ethical values such as diversity and equality, which is why I believe more space is becoming available for people who are under-represented to have a fair chance and contribute to the Canadian music industry.”

“I think we move forward from conversation to actual results by asking ourselves the tough questions, evaluating our values and abandoning small-minded behaviours mapping out the big picture. The big picture always includes many people, and people of every kind.”

As for Owen Barney, who will open for Sacha at the July 23rd Musicfest concert, the Toronto-born and raised musician first picked up a guitar at age seven and, influenced by country music heavy hitters such as Eric Church, Steve Earle, and Jason Aldean, started performing shows in the big city at age 14.

“As soon as I could play the guitar, all I wanted to do was play for people,” recalled Barney in May 2021 during a chat with Jason Sheppard of 25YearsLater.

“Our living room fireplace had this little mantle on it, so I used to stand on that and sing for my parents. I’d go into school and do a talent show, get the odd gig here and there in Toronto, and kept doing that and loving it more and more. I started playing with a band and then it all just came together and I haven’t stopped.”

2019 saw the release of Barney’s debut EP Home and appearances on bigger stages, but it was his 2020 follow-up EP No Road Too Long that took him to the next level with the charting singles “Thank Her For That” and “Pour Me” — the video for the former garnering 320,000 views before he was named Amazon Breakthrough Artist of the Month in September 2020.

“All this attention that I’ve been so fortunate to have, it’s the first time it’s ever happened,” said Barney in the same interview. “It’s like nothing I’ve experienced before. So I sit here and keep going … not get too excited. I just keep working, keep pushing forward and hope that it keeps happening.”

“When you’re a musician and songwriter, all you ever want is for people to hear your music and have it speak to them the same way that it speaks to you. Maybe not the same way but that feeling you get when you hear a special song — it’s your music doing that to somebody else.”

Barney has since issued a third EP, Tough Times, a three-song collection that gave him another hit in “You Make Me Wanna (Brown Eyed Girl),” which features the familiar riff from the classic Van Morrison song sprinkled amongst Barney’s music and words.

However, as Barney told 25YearsLater, the new EP’s title track is the song that he’s most proud of to this point.

“When I wrote that song, it was an exploration of songwriting for me,” he said. “I was driving to a show two summers ago and remember I saw on this gas station sign the price of gas and then beneath that some fella or gal climbed up there and wrote right beside it ‘too high’ and I thought that was funny. I wrote this song about a guy going through some tough times and that’s the song. I feel that really shows who I am and who I can be as a songwriter.”

While there’s no word on whether a full-length album is in the cards, Barney assures “I’ll always be picking tunes on the guitar.”

“It never gets old and it’s all I want to do. Hopefully you’ll see me around for awhile.” 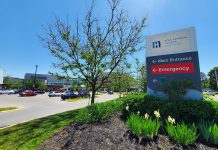