In 1986, I moved from my parents’ house in the suburbs to the third floor of a warehouse apartment at 393 Water Street.

At the time, I was working as a waitress at Fancie’s Dessert Café, just a few doors down from the massive, sparse, commercial building once home to the local Masonic Order.

“The masons used to congregate here,” explained Joe Stable, my neighbour across the hall, as he guided me down the apartment’s corridor into the massive kitchen that featured a pass-through window. I wondered aloud if members of this secret society served burgers and fries at their meetings.

The kitchen’s walls were covered in dirt, brightly colored paint, and original works created by members of an artist collective called The Acme Art and Sailboat Co. (also former tenants).

Make sure you also check out our previous stories profiling these two successful Water Street businesses:
Le Petit Bar and Chasing The Cheese.

After a few short weeks of moving in, the block on Water between Hunter and Simcoe Streets soon became my home. Similarly, all of the store owners who chose to live and work on this side of Peterborough’s downtown became my friends.

I purchased an extensive wardrobe of vintage kilts and beaded cardigans from Barb and Chris at Last Tango. I saved up all of my tip money from the café and splurged it on a pair of orange flats from Wendy at Bannerman’s (Water Street was the first location for her successful business).

My parents wanted to be supportive, but I knew they thought I was wasting my money living in a communal-type environment where we divided the grocery shopping and the cooking between the four of us.

But for me, life on Water Street symbolized my initiation into a world of art, music, culture, and independence I had not experienced growing up in the suburbs.

That was more than 25 years ago. And while it’s undergone some changes, Water Street remains an enclave of talented artists, craftspeople, entrepreneurs, and restaurateurs dedicated to being stand-outs in their fields.

If you haven’t recently, take a walk over to Water Street. The street isn’t normally filled with people because they’re all in the shops, discovering what makes this side of the downtown so diverse and truly authentic.

For our “The Renaissance of Water Street” series, kawarthaNOW writer Carol Lawless is profiling Mike’s Tattoo and The Planet Bakery, and kawarthaNOW writer Elliott Burton is profiling Needles In The Hay, Bloodline Parlour, and Sympathy for the Rebel. Also check out Carol’s previous stories on Le Petit Bar and Chasing The Cheese. 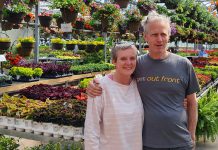