kawarthaNOW has an exclusive interview with Serena Ryder, in advance of her sold-out July 3rd benefit concert in Peterborough. kawarthaNOW writer Josh Fewings is a long-time friend of Serena’s and he recently had a chance to chat with her about the music industry, about coming home, and about inspiration.


It’s been another great year for Millbrook’s Serena Ryder.

She seems to be having a lot of great years in her career so far, with her numerous hit songs, critically acclaimed albums, successful tours, great collaborations, 15 Juno nominations and eight Juno awards, and even a turn co-hosting the 2014 Junos.

It was with all of her successes in mind that she decided she wanted to come back to Peterborough to play a benefit concert.

“I think it’s always important to give back to the community when you have enough for yourself,” Serena tells me. “And at this point, I do.”

Proceeds from the concert will benefit Five Counties Children’s Centre.

For more than 37 years, Five Counties Children’s Centre has been providing specialized services and treatment to children in Peterborough, the City of Kawartha Lakes, and Northumberland and Haliburton counties.

“Any charity that involves children and making their lives better is great,” Serena says.

Serena is a very interesting figure in the world of music and show biz, in that she loves her job and music itself but not so much the idea of stardom.

“I don’t plan on being a superstar who travels around the world and is on the cover of every magazine in every country,” she explains. “That’s really not attractive to me. I think it’s really weird. I think fame is really weird and really f**ked up.”

She describes herself as “a total introvert with an extroverted job” — something that is more common than you would think among performers.

Her enjoyment of songwriting is what she’s truly passionate about and appears to be her focus for the long term. The Canadian music industry recognized her immense song-writing talent by awarding her with a Juno this past March for Songwriter of the Year.

“It gave me the confidence that I can write for other people, which I love because it gives me a sense of freedom,” Serena says. “I’m looking forward to being a songwriter for people who enjoy having their faces plastered on all the magazines.”


The freedom she feels is twofold. First, it will give her more time with family and friends and meaningful time at home.

“It’s only going to be a few more years when I’m travelling and not being at home and not having time,” she says. “Family is so important.”

It will also allow her the freedom to write tunes that expand beyond herself.

“You don’t have to write based on who you are and what your identity is,” she explains. “You can go all over the map.”

“All over the map” is something she has literally become accustomed to, with shows across Canada, the U.S., and beyond. I ask her what it’s like coming home to the Kawarthas to play a show.

“Playing a show in Peterborough is really awesome. But it’s also pretty nerve wracking, to be honest,” she admits.

Serena describes a sort of whirlwind effect, which can be overwhelming in that there’s not enough time to really catch up with everyone. 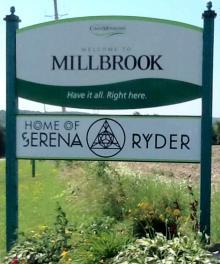 After Serena hosted the 2014 Juno Awards in March (and won two of her five nominations – Artist of The Year and Songwriter of the Year), residents of Cavan Monaghan wanted to honour her accomplishments in a public way. In May, Township Council approved the construction of additional signage recognizing forever The Village of Millbrook as Serena’s hometown.

The new signs, which feature the logo from Serena’s Harmony album, were designed by Serena’s mother, Barbara Ryder. As well as being a talented author and painter, Barbara is a master signcrafter. She’s a two-time winner of show card (window display) competitions and held a teaching appointment with George Brown College in Toronto as part of the “Signgraphics” team.

To accept the honour, Serena will be at the Township of Cavan Monaghan Office (988 County Road 10 in Millbrook) at 1 p.m. on July 3rd, the day of her concert at The Venue Peterborough.

“When I come back home, I see so many family and friends,” she says. “I want to give each person all of my attention.”

She does love coming home though, and the July 3rd concert will be a special show indeed — just two days after she headlined the big Canada Day celebration on Parliament Hill.

Serena continues to tour her latest album Harmony. Released in late 2012, it has been received extremely well and continues to sell strongly. While she tours, she’s also gradually writing material for a new record.

But she tells me she doesn’t have any firm plans for releasing a new record at this point.

I think Serena doesn’t want to force a new album simply for the sake of its release, because she has an important spiritual connection to her music. When I ask her about whether she would play any new material at her numerous gigs this summer, she only thinks for a moment before replying.

“No. Since I don’t know when the record is going to be out, I want to keep it sacred.”

After touring over the summer, she will head back to the studio.

“I need to hunker down and make some art,” she says. “It’s kind of a discovery time right now.”

Finally, I ask Serena about where her passion for music comes from. I remind her about a day in high school when she essentially said “This is it. I’m going for it.” I want to know how music took her from there to where she is now.

She hails inspiration as a sort of thrust into it all.

“There doesn’t seem to be a science to it,” Serena adds. “Inspiration is the closest thing to god that I know.”

Peterborough should be proud to have such a talented, inspiring, and inspired woman at the helm of Canadian music, and we welcome her home.

“What I Wouldn’t Do” by Serena Ryder

Want to see more Serena? Check out music.cbc.ca for videos of Serena debuting Harmony at The Mod Club in Toronto (November 20, 2012).