If you’ve read Matt Higg’s article Snowy owls swoop into the Kawarthas, you know there’s been an increase in local sightings of snowy owls as the raptors have expanded their hunting areas further south.

And now, this past Saturday (January 17), a Barred Owl was sighted perched (appropriately enough) outside the Ministry of Natural Resources and Forestry building on Water Street in downtown Peterborough. Commonly known as the hoot owl because of its distinctive call, the barred owl also goes by other names including the wood owl and the striped owl.

Although the barred owl is not rare, it is uncommon to see one so close to a busy location. So naturally, photos of the owl soon started appearing on Twitter. Here are a couple of the best photos:

If you’re interested in these fascinating creatures, check out some incredible photos of another owl that’s found in Ontario: the Eastern Screech-Owl.

Masters of camouflage, these nocturnal birds roost in holes in large trees, either natural cavities or in ones made by woodpeckers. When threatened, if a screech owl is unable to retreat back into its nest cavity, it will pull in all of its feathers, stand up tall, close its eyes and put up its ear tuffs so that they look like a branch on the tree.

These photos were taken by wildlife photographer Graham McGeorge of screech-owls in Georgia’s Okefenokee Swamp. Born in Scotland and now living in the United States, McGeorge is a member of the North American Nature Photography Association who has won multiple awards for his photos.

His “Masters of Disguise” screech-owl photos were featured in Episode 2 of the 2014 television series Cosmos with Neil deGrasse Tyson, as an illustration of evolution. For more of McGeorge’s wildlife photos, check out www.grahammcgeorge.com.

Here’s a video produced by Cornell Lab of Ornithology about the Eastern Screech-Owl:

Eastern screech-owls are sighted regularly in the Kawarthas, including in Peterborough at Beavermead Park, Jackson Park, and the Trent University Nature Reserve. If you have or happen to capture a shot of an Eastern Screech-Owl, please email your photo to publisher@kawarthanow.com and we’ll add it here. 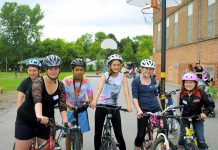 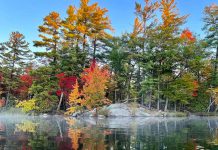 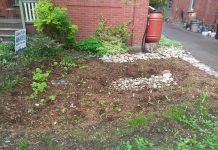