“What a pleasure to cook for Kris Kristofferson, Gordon Lightfoot, and the Hawk on Stony Lake with dinner music by members of Blue Rodeo, The Sadies, the Spades, and the lovely Melissa Ann Payne,” he writes. 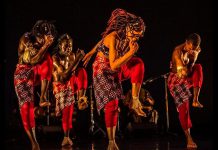 kawarthaNOW - September 17, 2021
Regional active cases fall to 85 with 4 new cases in Hastings Prince Edward, 3 in Kawartha Lakes, 3 in Northumberland, 2 in Peterborough, and 1 in Haliburton.