Thieves have stolen a trailer containing two race cars and parts valued at more than $300,000 from a storage facility on Edenderry Line in Ennismore.

The Peterborough County detachment of the Ontario Provincial Police (OPP) were contacted on Wednesday (November 14) about the theft, which occurred between August 5th and November 1st.

Investigators are actively looking for information that may lead to a suspect or suspects in this case. 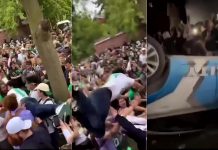