Blessed with numerous lakes and rivers and, of course, the historical treasure that is the Trent-Severn Waterway, Peterborough and the Kawarthas remains a boater’s paradise — but with that distinction comes great responsibility.

Since 1959, Peterborough Power and Sail Squadron volunteers have educated thousands of pleasure boaters in safe boating practices and knowledge of local waterways via a number of training courses. On Friday (June 7) at the Marshland Centre in Lakefield, several of those volunteers, including past squadron commanders, gathered to mark the squadron’s 60th anniversary.

“Think back over 60 years … how many students, how many instructors, how many hours,” marvelled Chuck Beal, national commander of Canadian Power and Sail Squadrons.

“We can never tell how many lives have been saved. There’s no way to count that. I think the better way to think about it is people are going out on the water with skills. They know to operate a boat and how to read a chart, they know about safety, they know about the rules of the road.”

“One of the by-products of that is they’re going to have more fun. Think about the number of families that have gone out on the water and had an enjoyable time and arrived home safely because of the thousands of hours of training this squadron has provided.”

During his tenure, Cmdr. Beal initiated Squadron of the Year and Squadron District of the Year awards. In 2018, the former was bestowed on the Peterborough Power and Sail Squadron, which is one of six squadrons in the Quinte District.

“I would like to say that it was a tough choice to choose Peterborough but that wouldn’t be true: it was a remarkable submission,” praised Cmdr. Beal.

“The only (award) criteria is you have to convince me why I should give you the award. One of the things that really struck me about Peterborough was the community involvement. That’s one of the reasons you’re so strong and vibrant after 60 years.”

The Peterborough Power and Sail Squadron traces its roots back to the mid 1950s when Mark Johnson, with his wife Dora, moved to Peterborough to work at General Electric. An instructor with the Toronto squadron, Johnson was surprised to learn there wasn’t a squadron serving the local area.

Johnson brought together like-minded boaters to form the Peterborough Piloting Club in 1958, On June 17, 1959, the Peterborough Power and Sail Squadron was granted its charter at the Rockhaven Motel, with Johnson serving as its inaugural commander. Current commander Nick Cliteur is the 49th person to serve in that role.

“Sixty years ago we had a group of people get together and say there’s a need to be able to share courses, seminars, and programs on boating safety so we can teach people how to handle a boat and operate it safely,” notes Cmdr. Cliteur.

“The Trent-Severn Waterway is very unique in terms of its navigational system. When I moved here from Toronto, it was a big introduction for me. On Lake Ontario you might see one buoy. Here you see one every few feet.”

“When I first launched a boat, I realized that although my Personal Craft Operator’s Card gave me the basic skills, I had to pull the book out for some of new buoys that I had never dealt with before. I thought if I have to pull the book out, then I need to take a course.”

“I found the Peterborough Power and Sail Squadron seven years ago, signed up for its course, and that made a world of difference in how much I can enjoy safely going about anywhere throughout the Trent-Severn system and now pretty much any waterway.”

With a current membership of 165 — Cmdr. Cliteur says it was as high as more than 300 at one time — the only criteria for Peterborough Power and Sail Squadron membership is a passion for boating safety. Having a boat is not a requirement.

“Eighty per cent of deaths on waterways are a direct result of not wearing a lifejacket,” notes Cmdr. Cliteur.

“Just like we had to get used to wearing seat belts many years ago, if people could do that, that’s when we know we’re going to start seeing lives being saved. When there are tragedies, we get in touch with the police agencies to make sure we understand what happened. We learn from what happened to those particular victims and share that in our courses. That’s how we keep our courses up to date.”

In his second year as commander, he says the squadron’s 2018 award, combined with the attention this anniversary milestone brings, will serve to bring more members its way.

Along with the courses it offers boaters — visit peterboroughsafeboating.org/courses.htm for a complete rundown — Peterborough Power and Sail Squadron members are very visible on local waterways.

One of the services the squadron provides are recreational vessel courtesy checks, which sees squadron members interact with boaters at area marinas to ensure the required safety equipment is present and in good working order.

This summer that service will be provided at four marinas. Recipients of that service, notes Cmdr. Cliteur, are for the most part appreciative.

“We very seldom run into any situation, mostly because we let the marinas know we’re coming and they get the word out to those who are going to be on the docks. We don’t just show up. And it’s a volunteer thing to let us on their boats.”

“We’re out there and that’s something people are receptive to. I think we’re going to be here for many, many more years.”

Canadian Power Squadron (CPS) was founded in Windsor in 1938 after a group of boaters travelled to the Detroit Power Squadron to take the United States Power Squadrons Coastal Navigation Course. Upon their successful completion of the course, they formed the Windsor Power Squadron. There are now 166 squadrons spread across all provinces and the Yukon Territory.

CPS was incorporated in 1947 and, in 1985, changed its name to Canadian Power and Sail Squadrons. At that time, the French name, Escadrilles canadiennes de plaisance, was formally adopted. The nationwide not-for-profit organization now has more than 20,000 active members. 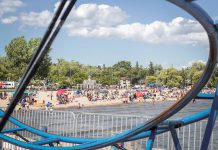