Of all the sage advice that has fallen on Andy Tough’s ears, “If it ain’t broke, don’t fix it” has clearly stuck — much to the benefit of followers of the rich and diverse local music scene in the Kawarthas.

Support local musicians by watching Live! At The Barn, premiering August 21 on YouTube

On the heels of the positive reception of the first “Live! At The Barn” series of live performances by five local music acts — each produced, recorded, and edited by Andy at the Norwood-area barn he owns with his wife Linda — a second series of six sessions has been recorded.

The second series will premiere over six weeks, starting in mid-January 2021, on Andy’s YouTube channel — where you can already view the five local bands in series one.

“To date we’ve had well more than 2,000 views and that number is growing as more people find it,” says Andy, whose regular business RMS Events, a multimedia enterprise specializing in audio/video production and presentation, has been severely impacted since COVID-19’s emergence in mid-March.

“Each episode has its unique audience because the music featured in each episode is different. That said, there are a number of people who have followed the entire series. That clearly shows how much people want to see live music again, even if it’s on a virtual platform. They need their music fix.”

The motivation for the series, according to Tough, is to provide local bands with an opportunity to play together in the same room.

“They have all been really grateful to have that opportunity,” he observes. “On top of that, they also wanted to get themselves in front of their fans. People are very faithful to local musicians. They follow them and go see them perform week after week in different venues.”

VIDEO: “Missin’ my Kitten” – The Fabulous Tonemasters (series one of Live! At The Barn)

Starting in late August, the inaugural season of Live! At The Barn featured five bands: Gunslingers (which opened and closed the series), The Fabulous Tonemasters, Wylie Harold and Out On Bail, The Weber Brothers Band, and House Brand.

Each recorded performance, mixed with interviews with band members, was uploaded to Andy’s YouTube channel and remains there for to be viewed at any time.

“A number of bands came forward after we slotted the first series,” says Andy.

“We didn’t think at that point that we were going to go ahead (with a second series). But as soon as we saw the response (to the first series), we got in touch with the bands that had approached us and then I reached out to a few others and we had the second season booked in a week.”

As for the mid-January start date of the second series, Andy says post-production takes a fair amount of time, and people will need a mid-winter fix of local music — especially given the continued uncertainty on how the pandemic will affect live music venues.

“We need to have some positive musical output in the depths of winter in Canada,” Andy points out. “Typically February can be a very depressing time. This will raise spirits all round.”

“Things haven’t really changed in terms of COVID,” he adds. “There’s no cure; there’s no vaccine. We may have been lulled into the idea that it’s going to go away sooner than later. Over the summer, a lot of bands had some opportunities to play live outside, but going into the winter everything will be closing down.”

“I think people are hesitant to go out even if precautions are in place. So we’re bringing the music to them.”

While no cost is charged each participating band (each in fact receives a recorded copy of their performance to use for their promotion), Andy is again seeking sponsors for the second series to cover his time and associated expenses.

Meanwhile, a link to each band’s email will again be featured with each video, allowing viewers to donate directly to the band. During the course of the first series, a few of the bands forwarded any donations received to the Peterborough Musicians’ Benevolent Association (PMBA), which provides financial support to musicians in need.

“For me, it’s a labour of love but it’s also an opportunity to get back to my roots. We (RMS) are an events company and there aren’t any events, so I’m out of work too. It’s just a great showcase for what we can do here (at the barn) technically. Hopefully that will result into some work from sponsors.”

Looking ahead, Andy makes it clear that his barn recording space, rustic in every way and intimate, will be used in some form to the benefit of local live music fans.

“Depending on the relaxation of the restrictions, we could — with physical distancing in place — accommodate an audience here, combining indoor and outdoor setting. Who knows? We could set up a big screen on the side of the barn and pump the music out to the back field. We’ll just have to see what happens .. but anything is possible.”

Until then, local music fans can check out the first Live at the Barn! series on Andy’s YouTube channel and stay tuned for series two.

As a long-time supporter of local music, kawarthaNOW.com is proud to be a media sponsor of Live! At The Barn. 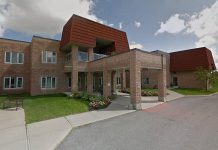 kawarthaNOW - March 1, 2021
Regional active cases increase to 102 with 9 new cases in Peterborough, 4 in Northumberland, and 4 in Hastings Prince Edward.