A Peterborough man is facing a slew of charges, including arson, after an incident at a Peterborough-area convenience store and gas station on Monday night (February 8).

Peterborough County OPP state that, at around 8:45 p.m. on Monday, a man entered the convenience store on Highway 7 just east of Burnham Line. After refusing to pay the required amount for some items he wanted to purchase, the man became irate with the cashier.

After the man attempted to destroy a computer monitor and cash register, the employee fled the store to call 911. The man then exited the store and poured washer fluid and hand sanitizer over two gas pumps, before setting them on fire. He is also accused of setting a fire inside the convenience store.

Police arrived at the location at around 9 p.m. and were able to arrest the suspect and extinguish the fires before any injuries occurred.

Several stores located within the building were also forced to close. A damage estimate is pending.

Murray O’Dette, 31, of Peterborough was arrested and charged with arson – disregard for human life, arson – damage to property, mischief – destroys or damages property, two counts of assault, mischief under $5,000, and theft under $5,000.

O’Dette is scheduled to appear for a bail hearing in the Ontario Court of Justice in Peterborough on Tuesday morning (February 9). 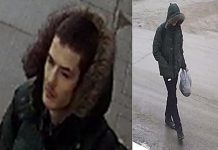