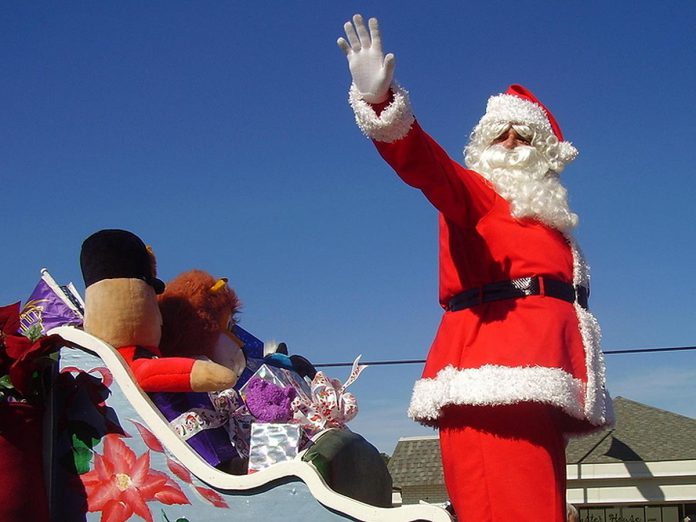 After a two-year absence because of the pandemic, Santa is returning to downtown Peterborough on Saturday (December 3) to take part in the 47th annual Kinsmen Santa Claus Parade.

The City of Peterborough has released information about road closures along the parade route, parking, transit detours, and more related to the parade, which begins at 4:45 p.m.

With increased vehicular and pedestrian traffic expected in the late afternoon, the city is also reminding everyone to leave extra time and use caution while travelling in the downtown area on Saturday.

To allow for both staging and the parade procession, the following road closures will be in place starting at 4 p.m.:

The parade will travel south on George Street starting at McDonnel Street and passing in front of City Hall at 4:45 p.m., ending and dispersing at Prince Street. A rolling road closure, supervised by Peterborough Police Services, will be in place along George Street during the parade.

Event volunteers will be available to remove barricades to allow for local access for residents and emergency vehicles along side streets. All road closures are expected to be over by 7:30 p.m.

Parking during the parade

No on-street parking is permitted on George Street between Brock Street and Prince Street starting at 3 p.m. on Saturday, December 3. Parking staff will be on-site to help ensure cars are relocated. Any cars still parked on George Street at 3 p.m. will be towed to a nearby lot.

People are encouraged to park in the King Street Parkade at 202 King St., the Simcoe Street parking garage at 190 Simcoe St. or municipal surface lots at the following locations:

Parking in municipal lots and parking garages is free on weekends. Any parking fees that are voluntarily paid during the month of December will be donated to Kawartha Food Share.

Residents are reminded to follow all on-street parking regulations that may be in place in the downtown area, including calendar parking where applicable. Please ensure fire hydrants and driveways are not blocked.

There is a Peterborough Petes game at the Peterborough Memorial Centre on Saturday evening starting at 7:05 p.m.

With the Santa Claus parade affecting traffic in the area, people attending the game are encouraged to plan for extra travel time when getting to the game. Paid parking at the Memorial Centre opens at 4 p.m. and the arena doors open at 6 p.m.