In this four-part series, local musician and greasy spoon expert Washboard Hank guides his daughter, food writer Eva Fisher, through some of the best diners in Peterborough. This week features The Speak Easy Cafe.

At the corner of George and Simcoe, The Speak Easy Cafe (362 George St. N., Peterborough, 705-749-9589) is bold in their advertising: fastest breakfast in town and world-famous Eggs Benedict. The breakfast was fast, but I checked with some friends from out of town and they hadn’t heard of the Eggs Benny.

BMPI: 9.99
BMPI (Big Meat Price Index) is the current price of a big meat breakfast at this establishment, providing a shorthand to the top end of their pricing.

Eva: Alright, have you been here before?

Hank: No, this is the first time I’m here. Our waitress doesn’t like eggs — doesn’t eat eggs — so I’m feeling a little nervous. I guess that’s really mercenary, because you sell eggs but you don’t like eggs.

Eva: You would just be disgusted all day long.

Hank: I guess that’s why she doesn’t like eggs — because she serves them all day long. She’s too busy to listen, that’s pretty good. Sure is packed in here, eh? I think we found … something.

Eva: They claim to have world-famous Eggs Benedict.

Hank: I think we should make this a world-famous breakfast review.


Eva: What’s the best breakfast you’ve ever had?

Hank: Linda’s. It was in London and Ken Palmer, the mandolin player for the Dixie Flyers, he was a very officious guy. “Hve you been to Linda’s?” I said “No”, “Well, it’s the best breakfast.” She had these incredible omelets. They were huge and everything was fresh and wonderful.

Hank: It’s not still going there. It’s been long shut down. The best paying restaurant that I’ve ever been to was just a little bit east of Woodstock. I went in and ordered breakfast and for some reason I bought a Wintario ticket.

Eva: So it was the sort of a breakfast where you could get a Wintario ticket.

Hank: Yeah, it was sort of a truck stop. So I sat down and scratched my instant win and I won a hundred bucks.


Hank: So I bought the band’s breakfast that day. Although as I recall, it was pretty awful. And really greasy. And the vegetarian in the band, he used to take napkins and daub the napkins on his eggs to soak the grease off them. Man, that used to just gross me out.

Eva: I think I read about doing that in like a teen magazine at one point, as a way to make your food less fattening.

Hank: It just seemed like the weirdest thing. (To Waitress) So I guess if you don’t like eggs, it must be horrible to work here, eh?

Hank: You can handle it though, right?

Waitress: Yeah, I can handle it. I’m not allergic to them at all. I just told everyone. Just the little kid in my head forever.

(Waitress gets called away)

Hank: Down in Nashville, I had brain and eggs.

Eva: What kind of brain?

Hank: Pig brains, I think. And it was scrambled eggs. The eggs were yellow and the pig brains were grey. You could get the texture of the two mixed up together and it was… I don’t see why brains and eggs isn’t more popular really.

Hank: Yeah, it was just like pretty much the flavour of the egg,

Eva: I have a really bizarre cookbook I should show you and it has a section on preparing brains. And it has wonderful pictures. There’s a frying pan full of brains.

Hank: Well, I didn’t notice any increase in my intelligence. Going into a restaurant and seeing something you’ve never tried before, that always inspires me because I want to try everything. When I was out in Denver I had Rocky Mountain oysters which are similar to prairie oysters, which in fact are fried bull testicles. I can say I’ve done it. You can’t say I haven’t had bull testicles.

The Speak Easy made a delicious breakfast, and it was fast. The potatoes were a little bit puffy in a nice way, like they’d been soufléed. The meat was good, but the ham was thin, prompting Hank to say “In every life a little rain must fall, in every breakfast there’s always something that’s not quite right.” 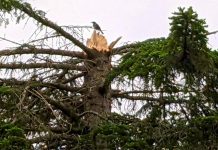 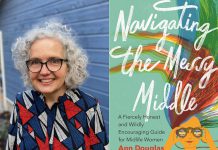 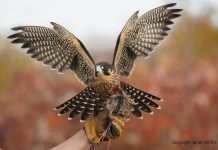