The Haliburton, Kawartha, Pine Ridge District Health Unit has issued a warning to residents who draw their water from Scugog River to ensure they use a proper filtration and disinfection system before drinking the water.

Those homes and businesses that are connected to municipal water from the Lindsay Drinking Water System are not affected by this spill and the water continues to be safe to drink.

The warning comes after a sewage spill occurred today (December 4) at the Colborne Street pumping station in Lindsay that saw 126,000 litres of raw sewage released into the river.

The spill reportedly occurred at 10:30 a.m. and was contained within 20 minutes.

Richard Ovcharovich, Manager of Environmental Health for the Health Unit, said the impact of this spill on the water quality would be minimal given the dispersion rate, but that residents living downstream from the pumping station should be aware of the spill and take precautions.

Ovcharovich also recommends that anyone drawing their water from any lakes or rivers, including Scugog River, should ensure they have a proper treatment system with filtration and disinfection to make sure their water is safe.

“Surface water can be contaminated by viruses, bacteria or parasites that can cause illness,” he says. “It’s important to treat the water before drinking or using the water to be sure it is safe.”

The City of Kawartha Lakes is investigating the cause of the sewage bypass. Currently, all pumps at the pumping station are working and there are no further issues.

If you can sew, Peterborough Regional Health Centre needs you to make face masks 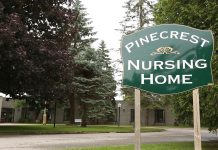 Death toll rises to 22 at Pinecrest Nursing Home in Bobcaygeon

If you can sew, Peterborough Regional Health Centre needs you to make face masks