Home News & Community 31st annual Crayola Sale is back at the Lindsay Ex on November...

If you’re worried you missed the annual Crayola Sale in Lindsay, don’t be — it’s just a month later than usual, happening this year on Saturday, November 16th.

The annual sale began as a yard sale on the front lawn of Crayola’s Canadian headquarters at 15 Mary Street West in Lindsay, and has since grown into a massive popular event at the Lindsay Exhibition Fairgrounds.

People line up for hours before the sale, with a few even camping out overnight, for the opportunity to get great deals on Crayola products while supporting the work of the United Way for the City of Kawartha Lakes.

Since the sale began, Crayola Canada has donated over $1,052,000 to the United Way for the City of Kawartha Lakes. While the 31st annual sale is a month later this year (it usually takes place on the weekend following Thanksgiving), the same great deals will be available for shoppers, just in time for some early Christmas shopping. 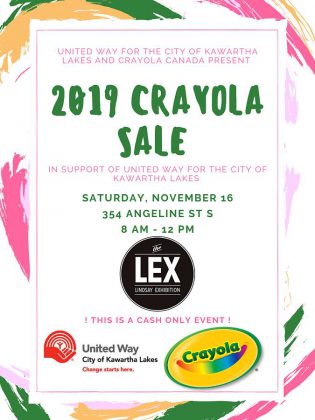 This year’s sale takes place from 8 a.m. to 12 p.m. on Saturday, November 16th in the main building at the Lindsay Exhibition Fairgrounds and is open to the public. All purchases at the sale must be made in cash.

Some of the funds raised at last year’s Crayola Sale went towards the Edwin Binney’s Community Garden, a large-scale food security project located on previously unused land at Crayola Canada in Lindsay. In its first season, the garden produced 5,428 pounds of fresh produce donated to those in need through 11 agencies and 10 food banks. The garden also provided food literacy learning opportunities to around 350 children and youth from local summer camps and schools.

For more information about United Way for the City of Kawartha Lakes or Crayola Canada, visit www.ckl-unitedway.ca or www.crayola.ca.

kawarthaNOW - February 17, 2020
Up to 15 cm of snow possible in some areas by Tuesday afternoon, winter weather travel advisory in effect.