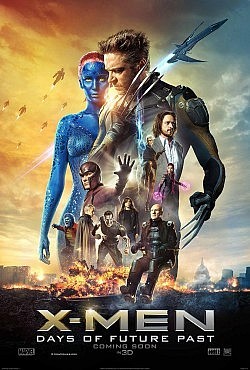 It’s almost quaint now to envision a time when superhero films weren’t financially viable. Throughout the 1970s to the 1990s, the major comic houses (Marvel and DC) kept afloat primarily through the strength of their print serials and limited commercial tie-ins. Adapting these stories to celluloid had only yielded eye-gougingly awful results. Google the Fantastic Four film from 1994 to meet the true face of direct-to-video.

This dearth of credibility finally ended when the acclaimed Bryan Singer (Usual Suspects, Apt Pupil) picked up the reigns to helm a mysterious adaptation of Marvel’s most recognizable entity other than Spider-Man — X-Men.

Beginning its run as X-Men #1 in 1963, the monthly publication chronicled a team of allied mutants, called “X-Men” due to their possession of the extra X-gene which grants them extraordinary and varied powers. The X-Men were formed under the tutelage of the vastly powerful telepath, Charles “Professor X” Xavier, to ally and assist humans who feared and hated the burgeoning mutant phenomenon.

Singer’s film was a resounding commercial and critical success that instantly green-lit pre-production on anything that had ever even resembled a comic. And why wouldn’t studio executives flock to this? Everything is already storyboarded.

As the franchise eventually fell out of Singer’s hands, the quality naturally diminished. The 2011 Matthew Vaughn vehicle X-Men: First Class may have been aiming for the charm of vintage Bond but the execution was pure Austin Powers — though Vaughn’s prequel did recruit a well-chosen ensemble of very appealing up-and-comers as the younger incarnations of the main roster.

X-Men: Days of Future Past — Singer’s very welcome return to the franchise — sees the last bastion of mutants desperate to survive against the genocide that the barbarous humans have inflicted upon them, chiefly with the aid of the chilling and indestructible government-funded bio-mechanical Sentinels.


Xavier (Patrick Stewart) and Magneto (Ian McKellen) send the ageless Wolverine (still Hugh Jackman) back in time to convince their apathetic younger selves (James McAvoy and Michael Fassbender) to prevent an assassination that would kickstart the current/future holocaust.

The elegant and mercurial Fassbender has electric chemistry with the damaged McAvoy. Their relationship now feels authentic and banishes memories of the seemingly endless hugging and crying the first time around.

This is certainly not a detriment. No matter how contrived her stunt queen red carpet antics may be, Lawrence has the intense versatility to you make you forget you’re watching one of the most photographed faces in the world.

The remarkable special effects have long been de rigueur but rarely are they presented with such riveting creativity. The positively nail-biting climax involves some of the most outlandish and spectacular computer generated imagery ever attempted.

It’s certainly an anomaly to have a genre film try and give you something you haven’t seen before.

Joss Whedon’s bombastic The Avengers may have been a more “fun” spectacle but, despite the odd moment of supposedly necessary comic relief, X-Men has never been about fun.


The execution of X-Men: Days of Future Past finally embraces the more disturbing aspects. Leave it to a superhero film to truly make wartime violence feel as senseless and disgusting as it really is.

But then Stan Lee’s X-Men comics have never received the praise for their progressive aspects that they truly deserve. The premise and subsequent adventures have always aggressively addressed social justice — specifically homosexuality.

In 1993, the series ran a storyline describing the Legacy Virus: an at-first lethal syndrome that initially only appeared in mutants but than affected “average” humans as well. Sound familiar?

As the adage goes, great science fiction is not about the future: it reacts exactly to when it was written. In the film’s narrative, the appalling persecution of minorities — and those who would harbour them — is truly nightmarish: Mengele-like experiments, labour camps, mass graves.

We may now only witness such horrors in historical documents and darker pieces of “fantasy” but, as this excellent film frankly reminds us, these are conditions that many, many people still must face as reality. And that is unacceptable.